Eric’s foray into Cypriot cuisine was exhaustive. The more he learned about it, the more his menu grew. He relied heavily on the excellent Cyprus Cuisine by Christina Loucas, which he was happy and surprised to find at the Tara (population: 1037) Public Library. Another win for Canadian libraries!

On the day of his assignment, he started cooking at ten in the morning, and he was getting things finished a little after eight in the evening.

“This table is too small!” I heard him call as he set out his dishes.

Indeed, there were plates and bowls and even a cake stand crowding the table when I sat down for dinner.

Fasolada: A vegetable soup with carrots, navy beans, and tomato. 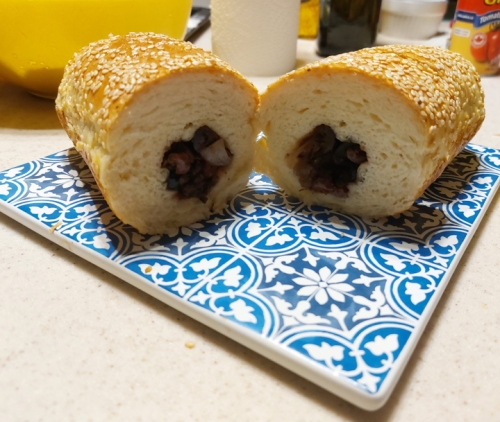 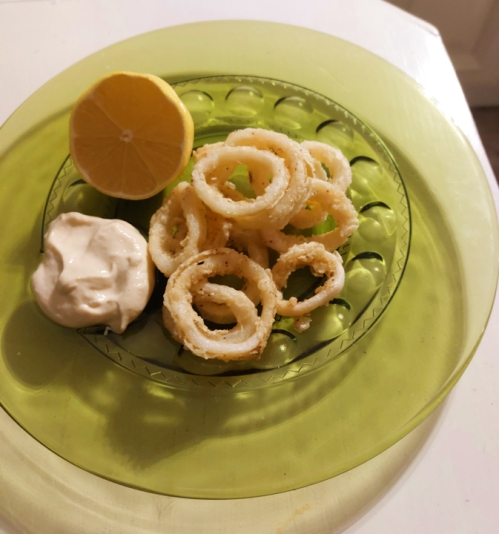 Eric found most of his ingredients, including kalamari and Mediterranean-style (non-dill) pickles at a nearby supermarket. Mastic powder (for the eliopita) was ordered online from Greek Table. Mahlab powder (also used in the eliopita) came from Montreal-based Épices Anatol, which takes online orders. A local cheesemonger, The Milk Maid, supplied the Cypriot halloumi.

Mediterranean food never disappoints for its variety, flavour, and presentation. Eric’s Cypriot feast was no exception.

We started with spoonfuls of fasolada, Cyprus’ national dish, which for a light soup was bursting with flavour. We dunked pieces of eliopita — which was absolutely beautiful to look at and even better to eat — into the broth.

We are both fans of squid, and Eric’s kalamari rings were perfectly tender with just a little crunch from the light breading. We dipped the kalamari into tashi, which any fan of hummus should try — it’s smooth and has an incredible zing of flavour.

The potatoes were prepared by first hitting them with a meat tenderizer, which broke them open and made them cook well and fast. Coloured inside by the red wine, and loaded with seasoning, they were another hit.

We’ve seen watermelon in savoury environs in a few assignments now. It added a generous splash of sweetness alongside the salty halloumi.

Eric wanted to include some greenery on his table, and opted for the louvia salad. With chunks of tuna, plenty of beans, and great crunch from the veg, it makes sense that it’s a popular summertime salad on the island.

We sipped our cold glasses of spritzer garnished with fresh mint between bites, and both enthusiastically said it should be featured in our next Wooden Spoon Wanderer showcase. It was sweet, citrusy, and so refreshing.

Our meal ended with a halved seed cake each. The cakes were stunning — Eric had lovingly iced and decorated them — and had a lovely light taste.