Japanese food is beautiful, with a stunning composition of colours: green, white, red, black. Its aesthetic appeal can make it seem like it must be difficult, but generally I have not found this to be the case. I’ve been making maki rolls for years — it was a staple meal when I cooked dinners for a family of four. Sushi was a favourite of mine to make because I could make a large quantity very quickly, and it always looked wonderful at the end (not to mention that the littles of the family were especially fond of avocado rolls). I enjoy Japanese food regularly, and was excited to journey beyond maki. 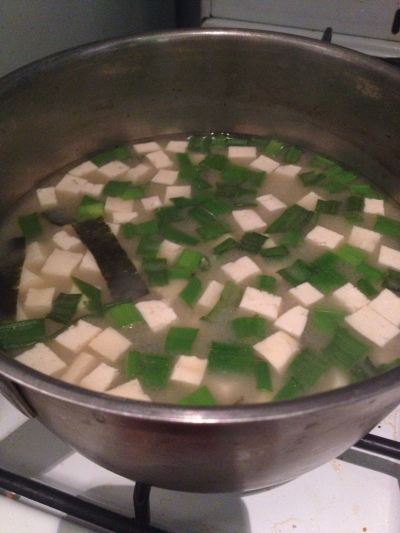 Miso Soup: The quintessential opener for any Japanese meal, this is a thin soup with soy paste (miso), nori (seaweed), tofu, and green onion. I’ve made miso soup from powder before, but this time I prepared it from scratch.

Maki: Probably the most iconic food out of Japan — vegetables or fish wrapped in rice and seaweed. I chose to make tempura yam maki and spicy crab maki.

I ventured to Sanko Trading Company in Toronto’s west end for all my Japanese shopping needs. There I found miso paste, nori sheets, ponzu sauce for the tataki topping, and wasabi paste. I found pickled ginger and mirin (sweet rice wine) at St Lawrence Market, and crab meat at our great local FreshCo. Fishmonger Hooked supplied the shrimp and sashimi-grade tuna.

Preparing Japanese food required more steps than any country I’ve taken on so far — searing fish, cleaning shrimp, mixing sauces, rolling maki, stirring soup, battering vegetables — all while keeping an eye on the clock to ensure everything would be ready at the same time. My greatest challenge was just keeping it all in my head because so much was going on at once (in the end I forgot to put the ginger on the table…sigh). No individual step was overly difficult. In fact, I graded the maki hardest at a difficulty of 3/5 because I think it would have been more challenging had I not had quite a bit of practice at it already.

The miso soup tasted just like any I would get at a restaurant, with a tangy, salty flavour and chunks of tofu and seaweed in the mix.

The tempura was perfectly crispy and lightly battered as directed. I did overcook the shrimp a little because I was afraid of serving underdone shrimp tempura, but it was still great. They were dipped in a salty-sweet sauce of soy, honey, ginger, and mirin.

The tuna tataki was probably the prettiest dish on the table. The tuna was mild in flavour, but the sauce added a gingery, citrusy saltiness.

We drank a Japanese strawberry soda called Marble Pop (a lesser known spinoff, I assume, of Ramune) with the unusual characteristic of being sealed with a glass marble. The drinker presses down with a specially-designed plunger to release the marble and access the soda inside.

The two kinds of maki I chose went together nicely. The yam maki had a little crunch and a really nice sweet flavour. (I ended up with so much extra tempura-ized yam that I served it alongside the tempura green beans.) The crab maki was juicy with a bit of a sriracha-mayo kick.

I really enjoyed making Japanese food. Setting the table dish by dish felt like wrapping a present, and eating the dishes felt like opening the present!