I had a little trouble finding recipes at first, in part because Nigerian cuisine is much better documented on the internet than Nigerien cuisine. (I have run into this issue once before, when I did Dominica.) The World Cookbook came through, and surprisingly, so did a cookbook from a friend called Love Real Food. The excellent Africa Cookbook also delivered a recipe for Niger’s version of nshima/pap/ugali: tuo.

Djerma (Peanut Stew): A thick soup made with peanut butter, tomato, greens, and chickpeas — the national dish of Niger.

Tuo: A stiff cornmeal-based porridge in the pap/nshima/ugali family, perfect for dipping into soups and stews. 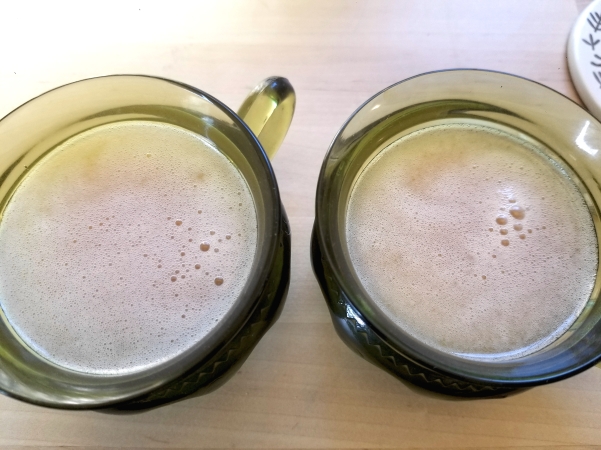 Baobab Juice: Refreshingly tart juice made from the fruit of the baobab tree, sweetened with mint syrup.

Only one ingredient gave me any real trouble in finding it, and that, you may quickly guess, was baobab. Shockingly, it was not easy to find in rural Ontario, but it was available online, and thanks to our globalized world, I had a bag of baobab powder waiting for me at the post office within a week of ordering it.

The first thing I wanted to make was the baobab juice, so it would be nice and cold by the time the rest of the meal was ready. I was excited to use baobab powder, since it was a first for the blog, and I took a deep sniff of the bag once it was open. It had a light, slightly citrusy smell to it. The recipe called for the entire bag, mixed with water, then mint syrup, which I made with mint leaves, water, and sugar. Once all combined, it went into the fridge to be chilled.

Next, I got started on the peanut stew. This, like most stews, involved lots of chopping and tossing things into a big pot, so it was an easy main dish. I’ve made peanut soups before for other West African assignments, but this one was by far my favourite. The all-natural peanut butter I used (so often peanut butters have corn syrup or other sugars hiding in them, which would not lend themselves well to a savoury environment) thickened the stew nicely. The recipe called for collared greens, but I ended up using chard straight from the garden, and it was an excellent substitute.

I’ve had quite a lot of experience preparing tuo and its cousins, so I knew I would be in for a serious workout. The recipe calls for corn meal, water, red pepper flakes, and a whole lot of stirring. The idea is to get a very stiff porridge that can be torn into chunks for dipping, and this takes a good while and a lot of muscle. Just when you think you can’t stir anymore and that your tuo won’t be stiff enough, it’s ready. Eric declared this slightly spicier version of this dish his favourite to date.

I would never think to toss avocado into a fruit salad, but that’s exactly what the World Cookbook had me to for the Nigerien fruit salad, which was delicious. The buttery avocado tempered the zingy pineapple and its softness complemented the juicier, crunchier melon. It was a very refreshing way to end our meal.

We enjoyed cups of the baobab juice alongside everything — minty-sour, it reminded me of a thick, more tart apple juice. I think if I made it again, I would sweeten it a little bit more, but either way it was a brand new experience with a brand new ingredient in the Wooden Spoon Wanderer pantry.