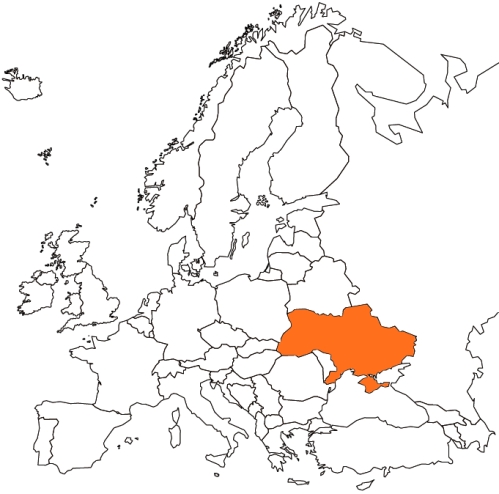 My research on Ukrainian food started and finished with The New Ukrainian Cookbook by Annette Ogrodnik Corona. I was inspired early on by her descriptions of the zakusky, Ukraine’s answer to the (Swedish) smorgasbord. A zakusky, wrote Corona, typically consists of a couple of caviars (including vegetable-based “caviars”), a herring dish, an egg dish, a salad, a bread, pickles, mushrooms, sour cream (smetana), varenyky (also known as pyrohy or pierogies), and maybe one or two sweets. I went through her cookbook, as well as Baba’s Kitchen by Raisa Stone, and created a menu for my own zakusky. 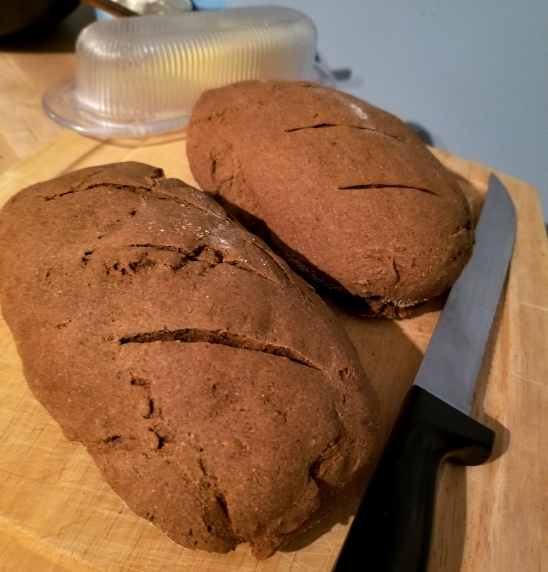 Chornyi Khlib (Black Bread): A dense, dark bread made from wheat, buckwheat, rye, and caraway, that gets its colour from blackstrap molasses and strong-brewed coffee. 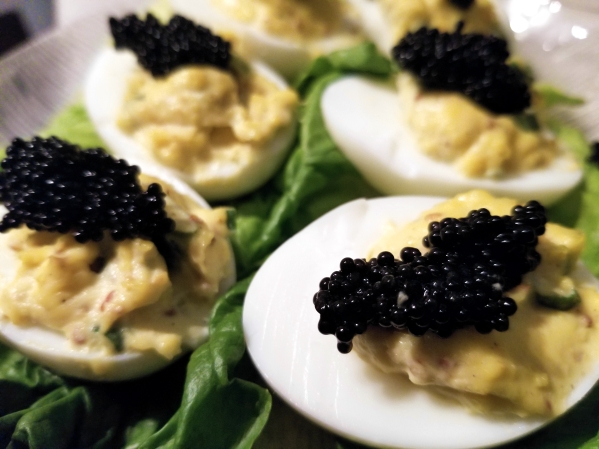 Nachyniuvani Yaitsia (Garnished Eggs): Hard-boiled eggs stuffed with their yolks mashed with mayonnaise, scallions, and mustard, and topped with a scoop of caviar.

Marynovani Oseledtsi (Pickled Herring): Herring has a special place in the Ukrainian culinary tradition, according to Corona, popping up in all sorts of recipes. This classic dish pickles herring fillets in vinegar, onion, and spices for at least a full day. 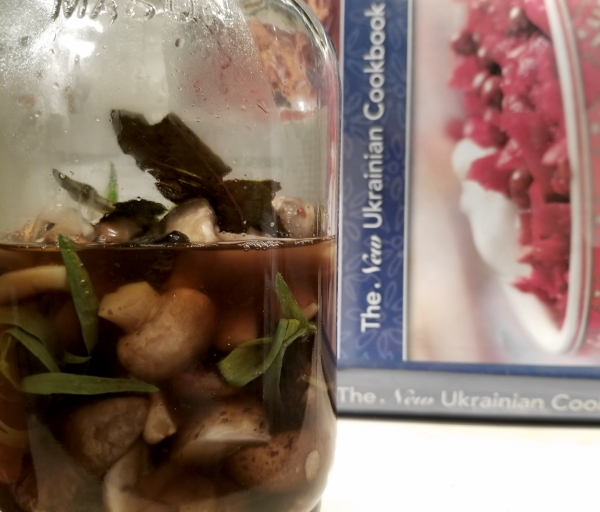 Marynovani Hryby (Marinated Mushrooms): Another much-loved ingredient in Ukraine is the mushroom. It was hard to choose a mushroom dish, since there were so many that sounded delicious, but in the end, I opted for this simple zakusky staple: Mushrooms pickled in vinegar, salt, pepper, and fresh tarragon. 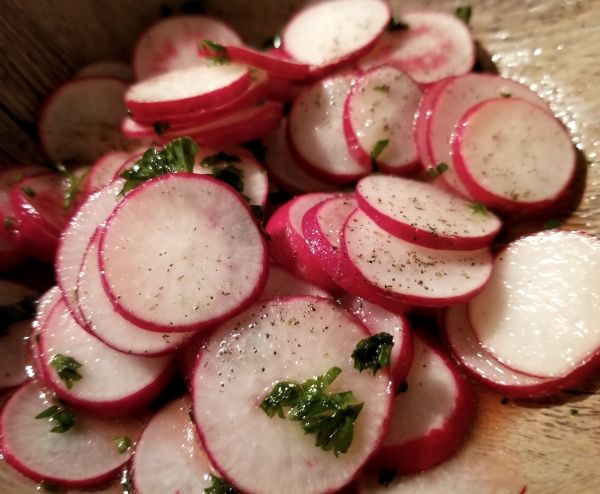 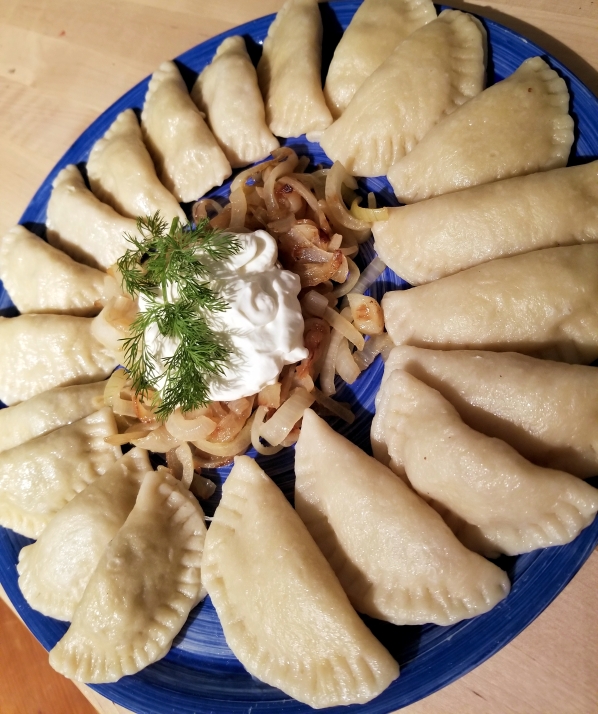 Varenyky: These soft little dumplings can be stuffed with just about anything. I made sauerkraut varenyky and potato varenyky. They are often served alongside sour cream and fried onions.

Pyrizhky iz Zhuravlynoyu (Pyrizhky with Cranberries): A sweet pastry pinched around a filling of cranberries and brown sugar. 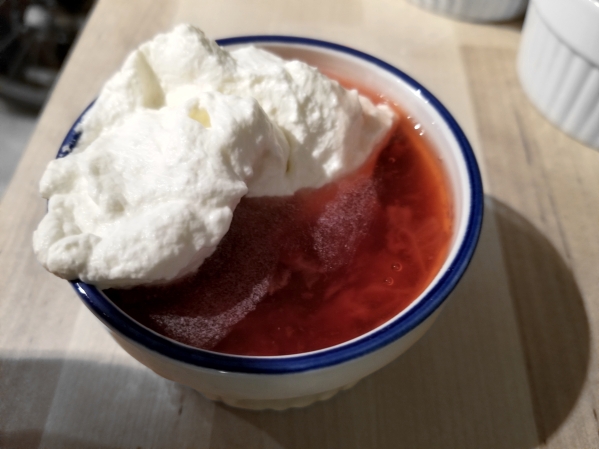 I went straight to St Lawrence Market for my ingredients, where I found lumpfish caviar for the garnished eggs, good dill Tymek’s brand pickles from the Ukrainian shop on the lower level, fresh herbs from a green grocer, and herring from one of the fishmongers. My plan had been to pickle the herring myself, but I was not able to find the specific type of herring that was needed, and herring sold in a white wine vinegar and onion marinade was widely available. Considering my large menu, I opted to make life a little easier for myself and got the herring at the market. Bulk Barn supplied all the flours I needed for the black bread, and blackstrap molasses. Everything else came from my local supermarket.

Okay, I may have gone a little bit overboard with my menu, but I was so excited about the idea of preparing a zakusky, and I guess I didn’t really think about just how much preparation I would be doing. I got started the day before with the marinated mushrooms and on the day of, I stepped into the kitchen at about 4:00pm and we didn’t sit down to eat until after 9:30. It was probably my most labour intensive assignment to date, with nine menu items to make, including three kinds of dough.

In the centre of the table, I arranged a platter with the two kinds of varenyky lining the edge and fried onions and a dollop of sour cream in the centre. The varenyky were squishy and full of flavour. I found the sauerkraut ones easier to prepare — the potato kind were much harder to seal and came open a little bit during boiling, although the filling stayed inside for the most part. They were delicious with a forkful of onions and a smear of sour cream on top.

The black bread was piled with toppings and eaten in thick slices. It smelled strongly of molasses, but in fact the flavour that came through most for me was the caraway seed. It was super dense and filling. The toppings included the beet caviar (one of my favourite things on the table, sweet and savoury at the same time), the marinated mushrooms (so tangy and tarragon-y!), dill pickles, dijon mustard, and pickled herring. 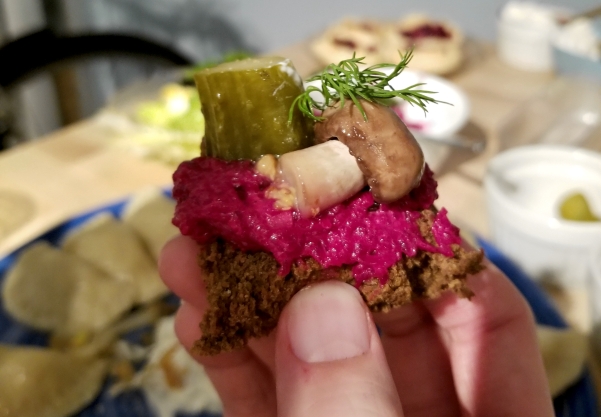 The radish salad was a light, mild accompaniment, a welcome flavour profile among the strong flavours of the other dishes. I love radishes. These were a not particularly spicy variety with a lot of colour.

The garnished eggs were an explosion of flavour, topped off with shining black pearls of caviar. Devilled eggs are one of my mother’s holiday specialties, and I’ve been making them with her for a long time. These packed a punch with the mustard, green onion, and of course, that super salty caviar.

I love that zakusky includes sweets and savouries side-by-side, since I love a sweet and salty combo. My cranberry pyrizhky were very challenging to fold, and did open up somewhat during baking, but they tasted incredible, especially for someone who loves tart desserts like I do (Eric prefers something on the sweeter side). 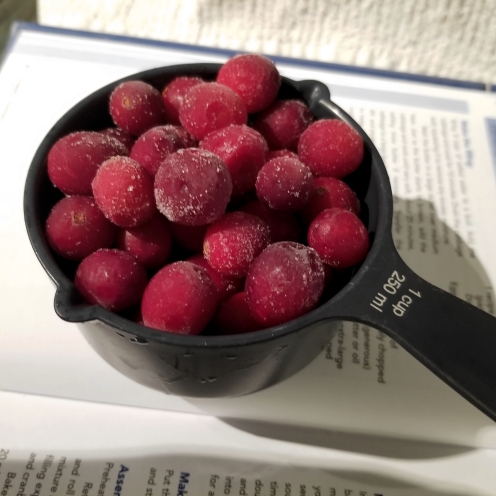 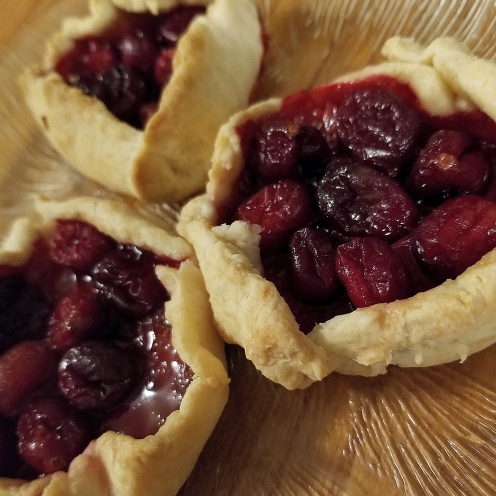 The strawberry kysil was a lovely way to finish, though in my opinion, it could have used further reduction to strengthen the flavour and sweetness.

I learned a lot from this assignment. Mainly that nine menu items is simply too many. But I also learned so much about Ukrainian foods this way, the flavours that can be found among their dishes, the effort that goes into preparing a spread like this, and the rewards that come from putting in the time.