Ah, America. Home of hotdogs and hamburgers, pizza and apple pie. Land of millions of diverse voices and thousands of traditions. Eric was faced with a challenge when he took on this assignment, because what is American food? Truly American food, if we look at the earliest cooks on the continent, is the culinary tradition of Indigenous peoples. Those foods we generally think of as the epitome of American fare, the snacks that fill the bellies of baseball game-goers across America, are often the recipes of immigrants. (Hotdogs and hamburgers are German; pizza is Italian; apple pie is English.) So Eric turned the exercise on its head and came at this assignment from a unique direction — he decided to create a menu of dishes that seem to be international, but are in fact rooted in the USA, often developed by immigrants. 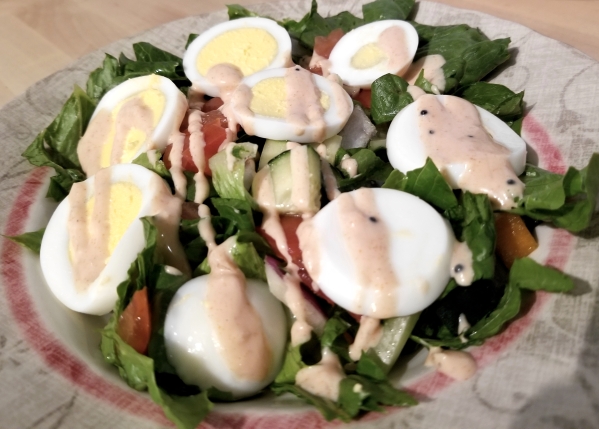 Garden Salad with Russian Dressing: Mixed fresh vegetables and hardboiled egg topped with a tangy dressing of mayonnaise, ketchup, horseradish, and caviar. Nowadays, caviar is often omitted, but early recipes (dating from the 1910s when it was invented in New Hampshire) included it, and it’s likely that this is where the dressing got its name.

Chimichanga: A deep fried burrito, filled to bursting with beef (Eric used soy beef), refried beans, sour cream, onion, tomato, cheese, and seasoned rice. The chimichanga was “invented” when a burrito was accidentally dropped into a deep fryer at a restaurant in Tucson, Arizona. Its name is derived from a Spanish swear word allegedly uttered when the burrito fell.

German Chocolate Cake: A fluffy layer cake coated with walnuts, cashews, coconut, and condensed milk. This cake derives its name from its inventor — Samuel German — and not the country of Germany.

Because Eric’s menu was so diverse, he ended up running around to a number of locations to get everything he needed. He went to Bulk Barn and three different supermarkets to find everything.

Eric laboured in the kitchen for over four hours to craft his USA feast. By the time everything was on the table, he was exhausted, and the kitchen looked as though a tornado had just come through it (at one point during the meal, I asked why there was a bottle of vinegar in the middle of the room, which he couldn’t answer). The results of his hard work, though, were extraordinary.

We started with the garden salad, full of fresh lettuce, cucumber, tomato, potent red onion, and slices of perfectly hardboiled egg. The pink Russian dressing gave it a zing of spice and salt.

The Vichyssoise was incredible (definitely WSW Showcase worthy). Potato leek soup is one of my favourites. Add cream, blend it to velvety smoothness, and sprinkle it with chives, and it’s only going to get better. Eric made it a day ahead of time to allow the flavours to come out. I’m not usually a big fan of cold soups, since I feel like soup should be cozy and comforting, but this was utterly fantastic.

I had heard the word chimichanga before, but I had no idea what it was. After eating one, I have to ask, why are all burritos not deep fried? Because it was SO GOOD — crispy on the outside, warm and spicy and cheesy on the inside. It was definitely an every-now-and-then dish, though, since I had the sense that my heart might not do well with regular chimichanga intake.

General Tso — another dish I’ve heard about a hundred times and never tried. As a stir-fry aficionado, this dish was right up my alley. Sweet and salty, with chunks of juicy marinated tofu and glazed vegetables, this spicy dish was a hit with me. Interestingly, I learned that the dish’s inventor created General Tso Chicken from a traditional recipe, but added sweetness to suit the New York palates to which he wanted to cater. Years later, when he set up a restaurant in China and featured General Tso on the menu, locals didn’t like it — it was sweeter than they were accustomed to.

We finished our USA feast with a thick slice of German chocolate cake. This was Eric’s crowning achievement of the evening (it sat on its cake stand, dripping invitingly with condensed milk, through the whole meal). The cake itself was wonderfully fluffy, and the nut-and-condensed-milk topping was richly extravagant. 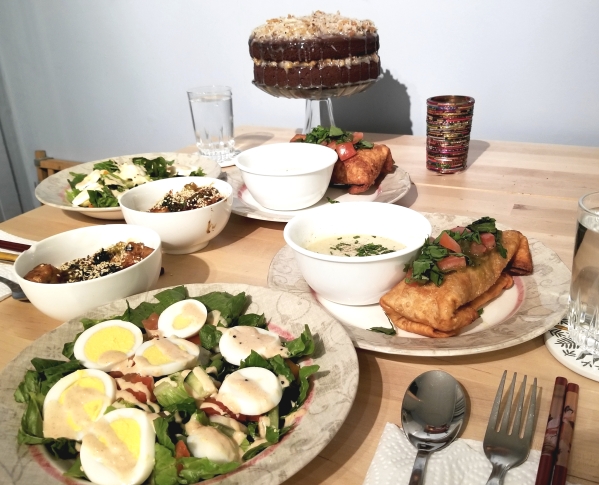