I don’t think our house had ever smelled as good as it did when Eric was preparing his meal for Trinidad and Tobago. I was surprised to learn that there is a large number of people of Indian descent living in Trinidad and Tobago, stemming from the late 1800s. For this reason, Eric found plenty of curry-based dishes, and along with the nation’s natural abundance of seafood and tropical fruit, he planned his menu.

Traditional Corn Soup: A thick, spicy carrot-, potato-, and corn-based soup with plump dumplings and pieces of corn-on-the-cob mixed in.

Most of the entries on Eric’s 72-item ingredient list were found at our local supermarket. The soft-shelled crab was purchased at Seafront Market at St Lawrence Market.

Everything we ate tonight had a really nice heat from the abundance of scotch bonnet peppers. The peppers are incredibly spicy when raw (Eric and I both chopped some and later thoughtlessly rubbed our eyes), but mixed into these dishes, brought a spicy kick that was not overwhelming. 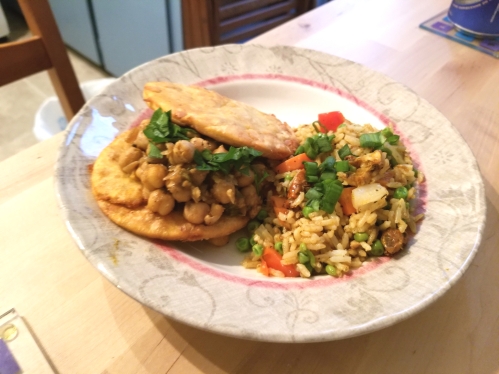 The doubles were amazing. They were the first item Eric added to his menu, after learning their origin. The bread is crispy on the outside and soft on the inside, and the chickpea curry was delicious.

The corn soup reminded me a little of the callaloo I made for my Dominica assignment. This Trinidadian soup also featured fat squishy dumplings and a thick broth, though this was bright yellow rather than the green of the callaloo. It also had chunks of sweet, Ontario-grown corn-on-the-cob. Scotch bonnets in the soup gave this, too, a nice spiciness. 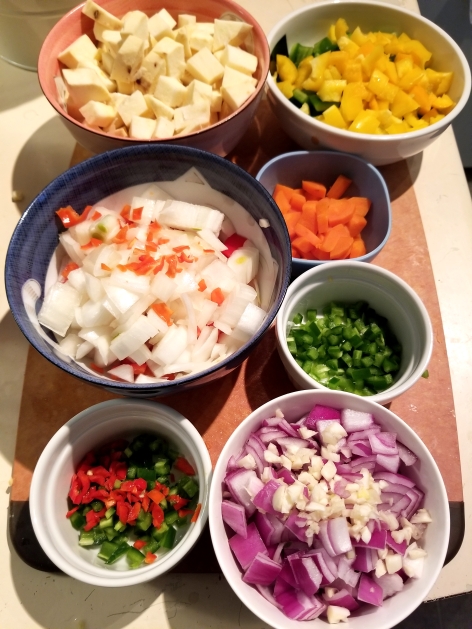 I think the rice pelau was the standout dish of the evening, though the other items definitely gave it a run for its money. The rice was a biryani-style fried rice, with freshly-cleaned soft-shelled crabs (Eric cleaned them himself), green peas, carrot, onion, and — you guessed it — more scotch bonnets.

The savoury/sweet fruit salad was a surprise — it’s not everyday that you eat something both cold and spicy. The juicy mango and pineapple combined with garlic, scotch bonnets, cilantro (I substituted parsley for cilantro since cilantro tastes like soap to me), and onion made for a refreshing salad eaten as an anytime snack in Trinidad and Tobago.

With plenty of leftovers for breakfast/lunch/dinner/snack/teatime, we look forward to enjoying all of these flavours again tomorrow.