Location: Western Europe
Population: 38,000
Capital: Vaduz
Geography: About half the country is in the Alps, and the other half is in the valley of the Rhine River
Language: German
Signature flavours: Milk products, pork, potatoes, asparagus, apples

I was excited to have my first Western Europe assignment, and was pleased to find a long list of recipes on the Liechtenstein tourism website. While Liechtenstein is tiny, it has a large culinary repertoire, and there was no shortage of cooking options. Kaesknoepfle, I learned, is pretty well synonymous with Liechtensteiner cooking, so that was a must, and I chose a vegetable-centric dish to accompany this carbohydrate extravaganza. I went back and forth between a number of desserts — Liechtenstein doesn’t disappoint when it comes to sweets — but the Kaiserschmarrn won out.

Kaesknoepfle: One of the staple foods of Liechtenstein, this local take on spaetzle features small doughy dumplings with caramelized onions and cheese. 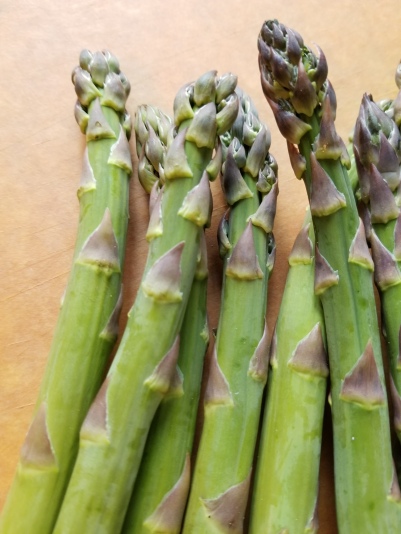 Asparagus with Dill Sauce: Asparagus is a favourite vegetable in Liechtenstein in the spring, as it is here in Ontario. Our variety is green to their white, but just as delicious when served with a creamy dill, white wine, and onion sauce.

Kaiserschmarrn: Roughly translated, this dessert is the “king’s mess,” a sweet cake served in bite-sized chunks with fresh berries and applesauce.

It’s asparagus season here in Southern Ontario, so I got the best this province could offer in locally-grown asparagus. You can get sad, skinny asparagus in the off-season, but these asparagi were seriously burly.

The kitchen is still a disaster, and I’m pretending the enormous stack of dishes doesn’t exist, and that there isn’t a trail of uncooked ‘schmarrn batter from table to oven. Liechtenstein may have been the single most difficult assignment I’ve carried out — not because the dishes were particularly fussy — because everything was happening at the same time. There was no moment when one thing was baking for twenty minutes, and I could focus my efforts on this other thing. I barely got any prep photos because THERE WAS NO TIME. The asparagus was done boiling, and the ‘schmarrn needed to be turned over, and the onions were burning, and the kaesknoepfle dough needed to be put in water… It was an hour and a half of pure chaos, during which I slightly overcooked the asparagus, burned the kaiserschmarrn, and crisped the onions too much.

It didn’t matter. The food was amazing.

I’ve made spaetzle before and I really like it. Kaesknoepfle is essentially the same dish, but maybe a little eggier. If you have a spaetzle maker or a knoepflehobel, I’m sure making this dish is a lot easier. As it was, I chose to “pipe” the dough with a pastry bag, snipping off pieces of dough with scissors. This may have been my best (or only) option, but it was really, really time consuming, and it was hard to pipe, stir, flip, cry, and chop at the same time. It worked out in the long run, though. My kaesknoepfle were definitely bigger than the traditional kind, but they had that “al dente” squishy dumpling-ness, were nice and cheesy, and were rounded off with the fantastic flavour of caramelized onions.

The asparagus was delicious. While neither Eric nor I are lovers of asparagus, this fresh, local stuff was great. The sauce was creamy, with the white wine coming through, and the dill featuring as a starring flavour.

Despite being a tiny bit burnt, the kaiserschmarrn was great. I was worried about it at first, since my egg whites refused to become meringue, no matter how much I whisked. I think there must have been a little yolk in there, which I learned will completely throw off the meringue process. I “folded” my egg whites into the batter as is, and the cake turned out just fine. It was soft and eggy, sweet with powdered sugar, raspberries, and raisins, and Eric and I eagerly dipped ‘schmarrn pieces into the warm applesauce.