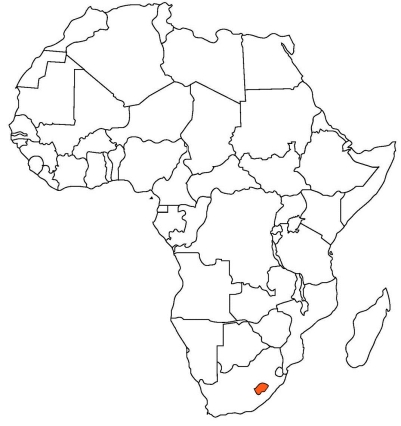 I am not exaggerating when I say I could only find a handful of recipes from Lesotho. I did find a few meat-heavy barbecue options, but since I was looking for dishes that would be pescatarian-friendly, I had to look beyond the beef-y and the chicken-y.

Chakalaka: The name of this dish sounds like it should be shouted in jubilation: Chakalaka! It is a vegetable fry-up, featuring carrot, onion, bell pepper, chilies, and tomato.

Pap: A stiff corn meal porridge used as a dipping medium for stews. I made something very similar called nshima for my Malawi assignment. Pap has a mild flavour and a pleasingly tear-able texture.

Butha-Buthe: A soup of tangerine and spinach, with spring onions and split peas, spiced with turmeric and parsley.

I like an ingredient list that I can easily buy at my local grocery store. Sometimes doing a city-wide ingredient hunt is fun, but with my Lesotho menu, I could relax knowing I wouldn’t have to go on a rare item hunt through the shops of Toronto.

Chakalaka and pap were bound to be good. The chakalaka had a nice crunch, a little spiciness, and was a nice balance of flavours — we could taste all the ingredients in equal measure. The pap had a very mild taste, maybe a little corny, but mostly it soaked up the flavours of its chakalaka environment. It was stickier than similar porridges I’ve made, owing, I think, to its quicker preparation (the Malawian nshima was a laborious process of adding minute amounts of cornmeal at a time and stirring for decades, with the payoff of a very firm porridge). Nonetheless, we scraped that pap bowl clean.

The butha-buthe, an unusual mix of sweet citrus, spinach, and savoury broth, was an unexpected hit. With a tangerine zing at the beginning of each bite, and a spinach-y aftertaste, the soup was still dominated by the flavour of the split peas, which were delicious. I can’t say I loved it, but I liked it quite a lot, and mostly, I enjoyed the surprise of a soup with tangerines in it.