Eric’s Algeria assignment followed right on the heels of my Morocco assignment. We learned through our respective research that these two countries have historically often been at odds, especially over the disputed territory of Western Sahara, but when it comes to culinary traditions, the two are more alike than they are different. An abundance of spice and colour comes to mind with these North African neighbours. Eric knew there would be couscous on his menu, since it’s a regional staple, but otherwise his meal explored flavours that mine didn’t.

Algerian Kefta: Deep fried meatballs (ours were made with soy beef) with onion, parsley, and mint. 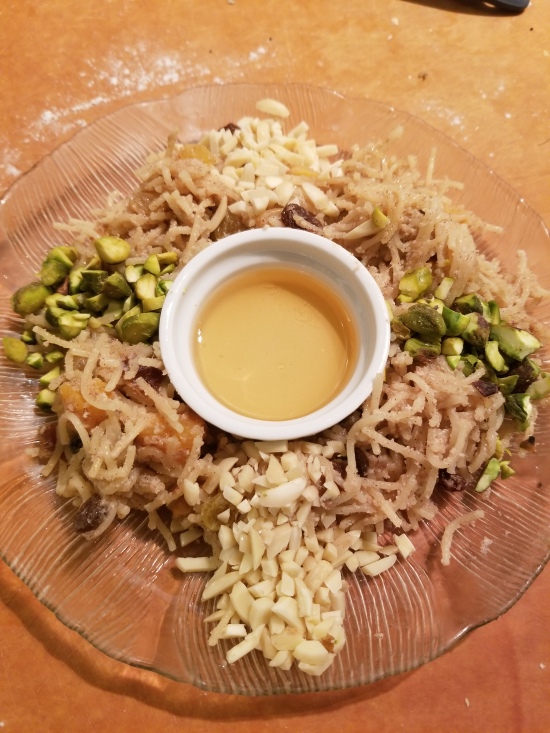 Eric went to St Lawrence Market to buy an elusive yellow zucchini, and everything else he found either at Bulk Barn or our local supermarket.

With just one main — the couscous and stew, which differed quite a lot from my Moroccan stew and couscous, showing the versatility of such dishes — this meal allowed us to sample the flavours of Algeria through a number of appetizers. The kefta were moist and full of flavour, losing nothing for being made of soy instead of beef. In our part of the world (Canada), mint is usually only found in teas, toothpaste, and gum, but it was a wonderful addition to the savoury kefta, adding an aromatic quality that we really enjoyed. It was one of my favourite dishes on the table.

The sardine (Algeria and its neighbours are among the world’s top exporters of those lil’ fish) boulettes were crispy on the outside, soft and meaty on the inside. Algeria has a culinary tradition informed by various cultures, including the French. This dish is an example of Pied-Noir cuisine, developed by Algerian-born French colonists, who occupied Algeria from the 1830s until 1962, when Algeria became independent — at which point, many returned to France. 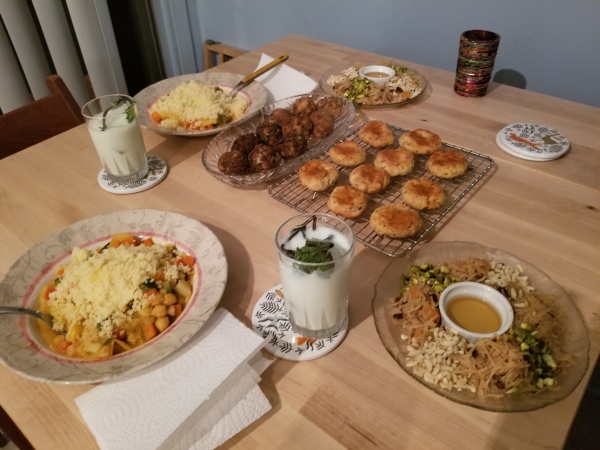 The cheese mantecaos — a dish imported from Spain — are a savoury take on a traditional Andalusian shortbread. They are more a bread than a cookie in their Algerian form, and pack a little spicy punch, for which the lait parfumé is the perfect answer. In fact, though this meal was not the spiciest we’ve had on our international eating journey, the mix of cold milk and mint was the perfect solution for a burning tongue. It also has a lovely, light flavour that would be ideal for a hot day.

Seffa is Eric’s second attempt at a vermicelli-based dish. His first was for Bahrain — balaleet, a savoury breakfast food, which was sadly ruined by a faulty recipe that called for an unpalatable amount of oil and butter. Happily, the seffa was a success, despite our unfamiliarity with pasta-based desserts. Loaded with toppings, including dates, dried apricots, both Thompson and yellow raisins, almonds, and pistachios, this was a hearty finish to a delicious assignment. Even though I don’t typically enjoy the perfume-y flavour of orange blossom water, in this context, it was tempered by honey and the presence of so many other ingredients.

As per “WSW rules,” we will now leave North Africa behind for a while (we don’t do more than two countries from the same region in a row, to avoid monotony and so we can crave those flavours again later on), and head to the Middle East (Saudi Arabia) and then Central Africa (Rwanda).