Eric’s main resource was a blog called Alica’s Pepperpot. He built his menu around her recipes as well as a few other online resources. With this assignment, he found a spicy, garlicky cuisine with beef-centric dishes.

Pepperpot: Chunks of beef marinated in cassareep — a sauce made from cassava juice, demerara sugar, and spices — with garlic, onion, and hot peppers.

Sirnee: A traditional Ramadan and Eid dessert enjoyed by Guyana’s Muslim population, this buttery pudding is made from flour, butter, and spices, and studded with raisins, walnuts, and juicy cherries.

Eric found most everything he needed at FreshCo and Bulk Barn. He looked high and low for wiri wiri peppers and came up empty-handed. Online sources recommended Scotch bonnet peppers as an alternative, since they have a similar intensity.

The lime wash recipe called for key limes, but Eric could find none, and had to settle for regular limes.

Eric hinted a couple of times at how ambitious his menu was, but it wasn’t until we sat down at the table with plates full of homemade seitan beef that I realized what he had meant. The pepperpot was a big job, starting with the cassava gravy (cassareep), which had Eric peeling, grating, and juicing cassava late into the night on the eve of his assignment. The juice was then heated with a combination of spices and demerara sugar until it reduced into a thick sauce. (Cassava is poisonous if not properly prepared. Don’t think that didn’t cross my mind while I watched him squeeze cassava milk through cheesecloth.) 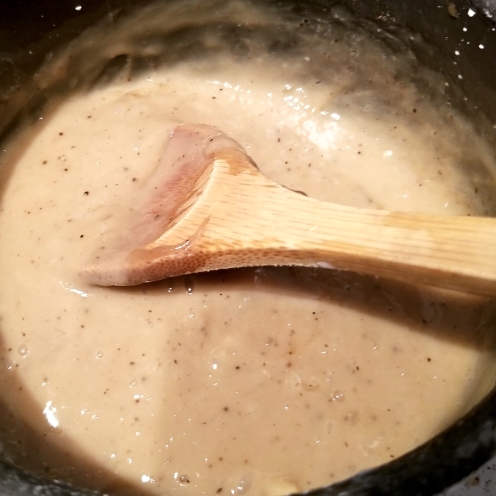 The next day, he made a loaf of wheat gluten, nutritional yeast, onion, ketchup, and spices. After baking, it resembled a light-coloured meatloaf. He cut this into chunks and stewed it in gravy until it had absorbed the flavours of the garlic and peppers. The result was a moist, spicy, meaty dish packed with flavour. It had a strong heat, but also a sweetness from the cassareep that tempered the experience.

The bread was the most difficult item on his menu, resisting his attempts at braiding and then rising a little over-exuberantly to the point that when it was at last ready to bake, Eric’s beautiful plaiting could barely be perceived. The taste was wonderful, though. It had the crusty exterior and fluffy interior of a French-style bread and made for great dipping.

I love dhal any way it’s served, and Eric’s was no exception. The flavour was fantastic — spicy, earthy, and garlicky. I’ve never had a pureed dhal, and the smooth texture was really nice.

The lime wash was a unique beverage, with a lime-forward flavour and a vanilla aftertaste. Neither of us loved it at first, but before I knew it, I had refilled my glass two times. It was tart yet sweet, and it grew on me.

The sirnee was incredibly rich — sweet, nutty, and buttery. The texture was that of a stiff pudding, with the crunch of a walnut or the chewiness of a raisin or cherry in every bite. We both really liked it, but it was heavy and I had to give myself a rest after a few bites. I can understand why this is a must after a period of fasting. 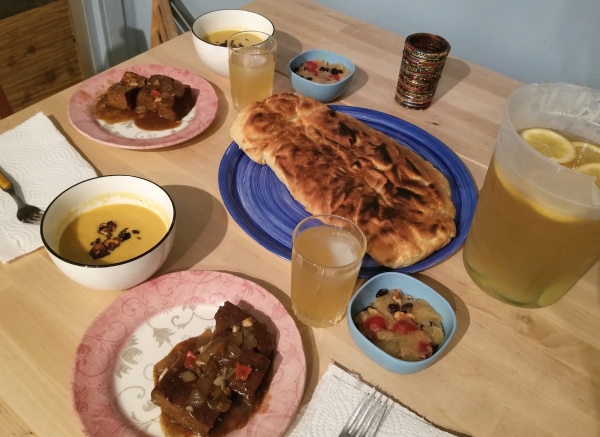