Toronto is a great city to live in — it’s safe, contains a fair bit of greenspace, and offers an incredible variety of international cuisines. But if there is one thing that Toronto can say it has that is the best in the world, it has to be our library system. Yet again, my kitchen table was piled high with cookbooks from my nearby branch, and I had my pick of Polish recipes. I marked every page that caught my eye with a strip of paper, and when I had gone through all four books (some spanning a few hundred pages), I had amassed about 50 potential recipes. I narrowed it down with a harsh review of the candidates, which left me with 20. These I wrote down, and then selected a number that I felt would make a good Polish meal.

Grzyby (Twice-Cooked Mushrooms): One of the most beloved of all Polish ingredients is the mushroom,  a fact hammered home in each and every cookbook I was using. This recipe is a bit of a misnomer since the mushrooms are actually cooked three times — boiled twice, then fried with butter, onions, and sour cream. 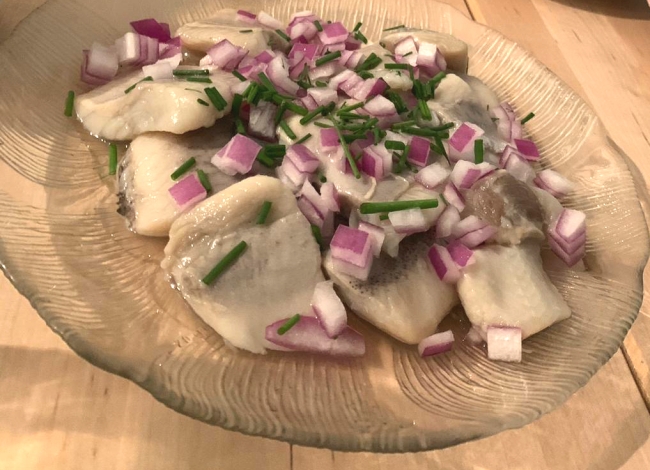 Herring with Chives: Pickled herring with red onion and chives. This side dish is an Eastern European favourite, often served alongside rye bread.

Prep and cooking time: 5 min (not including pickling)
Difficulty: 1/5

Rye Bread: My own recipe for a dark, dense, rich rye loaf.

Krokiety: Crepes stuffed with sauerkraut, mushrooms, and ground beef (or soy in our case), then coated in breadcrumbs and fried until crispy.

Poppy Seed Puff: An eggy poppyseed cake traditionally glazed with a white wine sauce. Mine was iced with a simple lemon sugar icing.

Mazurek: A delicate almond meal crust filled with a sweet jelly of whole pureed lemons and oranges, topped with sliced almonds. Mazurek varieties abound in Poland, where every family has its own version.

I headed straight to St Lawrence Market with my shopping list, knowing it would be the best place to find the high quality seafood (including pickled herring), fresh mushrooms and herbs, and a few other items that I needed. Nothing was too difficult to find, and what St Lawrence didn’t have, our local supermarket did.

Cookbooks require a special kind of editor, one who can browse for grammar mistakes, continuity, and also potential errors in measurements and ingredient lists. Wild Honey and Rye was a wonderful cookbook to work from, and provided the recipes for apple mashed potatoes (simple, delicious comfort food), pan roasted leeks (creamy, delicately flavoured, and melt-in-your-mouth), and herring (a classic regional dish that is an explosion of flavour). Authentic Polish Cooking was also pretty good to work from, and it provided the (labour-intensive) instructions for the krokiety, which were excellent. 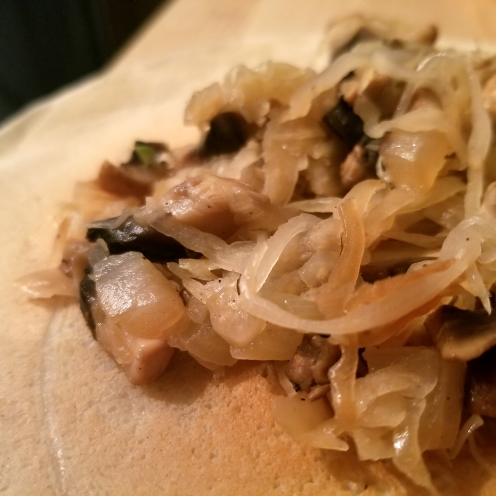 Not all cookbooks are created equal (or edited equally) unfortunately, and I ran into a lot of problems when it came to dessert. 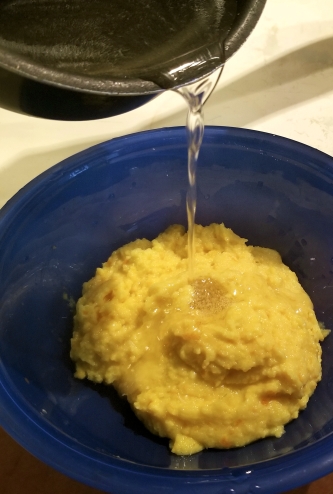 The mazurek recipe was full of mistakes, in quantities and steps, cooking time and temperature. I ended up having to do a lot of my own figuring out. The final result was quite nice, although the amount of orange and lemon zest, including the pith, made for a rather bitter aftertaste. If I made it again, I would remove the pith, and use the zest of one lemon instead of the two recommended by the recipe.

Okay, so I learned some things from this dessert. 1) A makeshift double boiler can fail and result in an enormous mess; 2) the top of your stove lifts up so you can clean underneath; and 3) Poppy seeds have ulterior motives.

I opted to make the poppy seed puff because it sounded so unique, but also quite easy to make. But that’s what the poppy seeds wanted me to think.

Poppy seeds, it turns out, are quite hard to grind to a paste. They don’t want to be a paste. I tried using a food processor, hand blender, mortar and pestle, and the bottom of a mason jar against a cutting board (a suggestion from the internet). The winning method was pouring the poppy seeds into a bag and using a rolling pin with all my strength to press them flat. It was a messy business.

I ran into trouble with the white wine glaze as well, which had such a lot of wine and so little sugar, that the taste was too strong and the consistency too runny. I ended up throwing together a simple icing instead.

There are poppy seeds everywhere now. They’re on the counters, in the sink, squished into the bottoms of my socks. I think my cat just coughed up a poppy seed ball. No one who is allergic to seeds can ever come to my house again. In ten thousand years, when the aliens come to explore earth, they will find my house, and they will say, “Ah, this is where they grew their poppies.”

But overall, I have to call this assignment a success, and there will be some Polish recipes in our everyday repertoire from now on (pan roasted cod with a side of apple mashed potatoes? Yum).