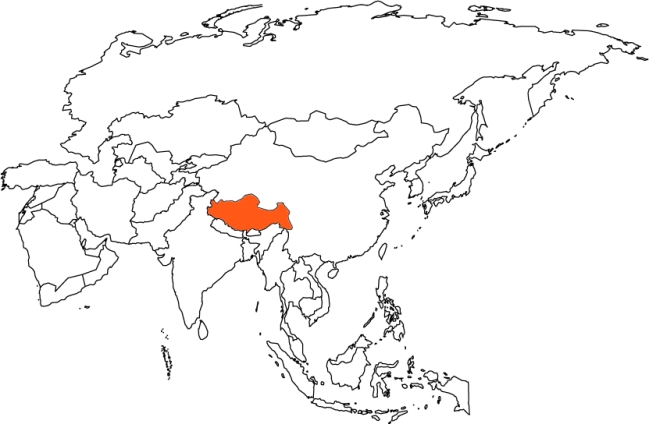 Eric and I fondly remember our trip to New York a couple of years ago. After walking though Times Square and taking pictures of the Rockefeller Building, we stopped for dinner at the much-lauded Cafe China. Eric’s first course (mine was jellyfish) was duck tongues. After eating a few, he got a worried look on his face.

“I think my tongue is numb,” he said.

“Maybe you’re allergic to something in your food,” I replied unconcernedly, slurping up some jellyfish.

He worked from an excellent book called the Lhasa Moon Tibetan Cookbook. Apart from sharing Tibetan recipes, the book provided plenty of background on the local culture and culinary tradition. 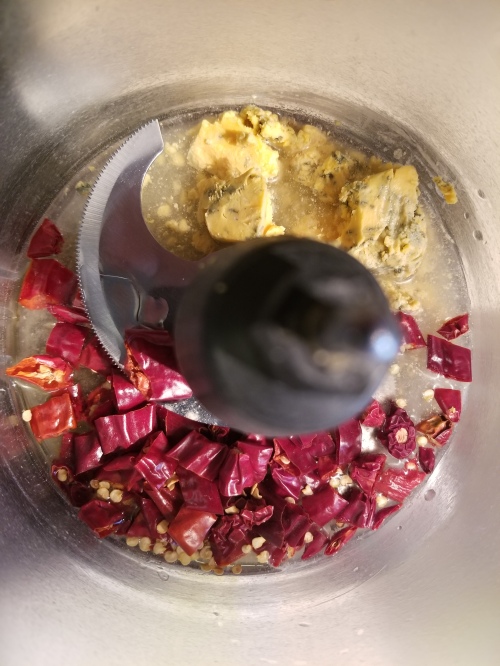 Red Churu Sibeh: Some like it hot. Others like it cheesy. Tibetans like it both. This is a seriously cheesy, seriously spicy sauce made with churu (blue cheese) and red chilli peppers. 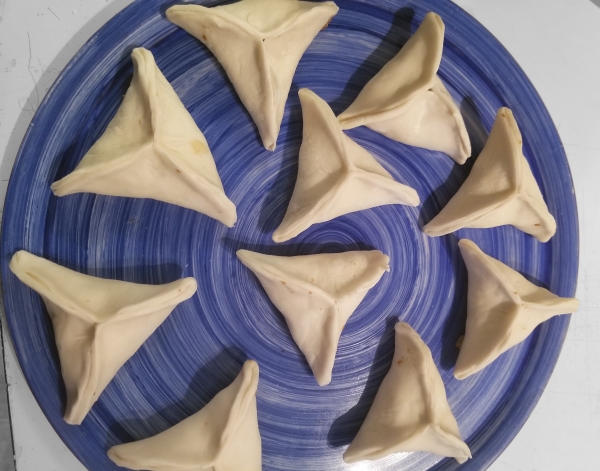 Beef Momo: Pastry delicately folded around ground (soy) beef, onion, ginger, garlic, chives, celery, and Szechuan peppercorn. There are dozens of ways to fold a momo, but Eric opted for the “monk” fold (allegedly the easiest). 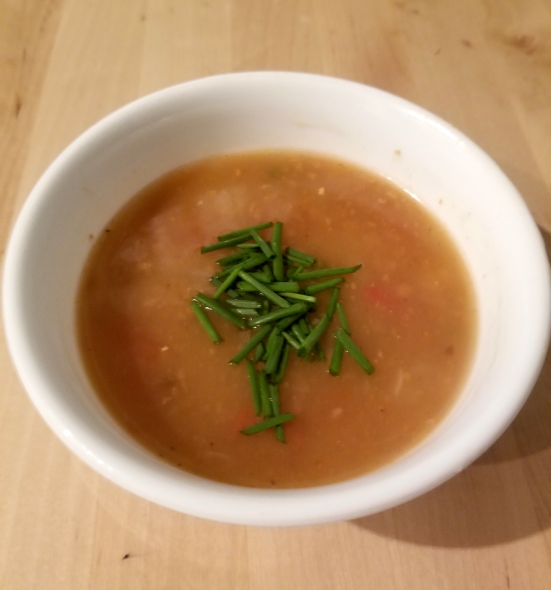 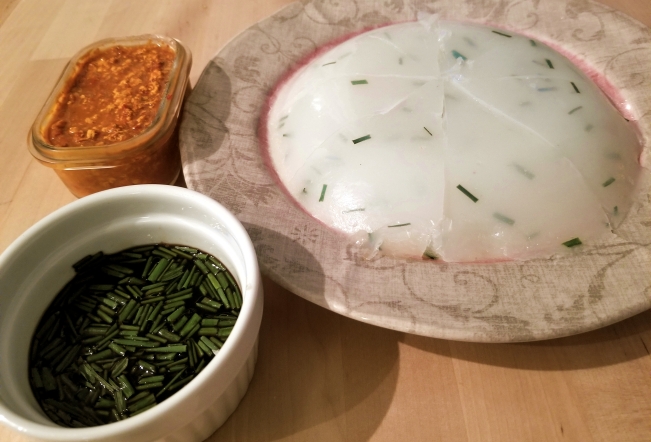 Le-Ping: A mung bean gelatin infused with chives, and garlic, served with soy sauce for dipping. 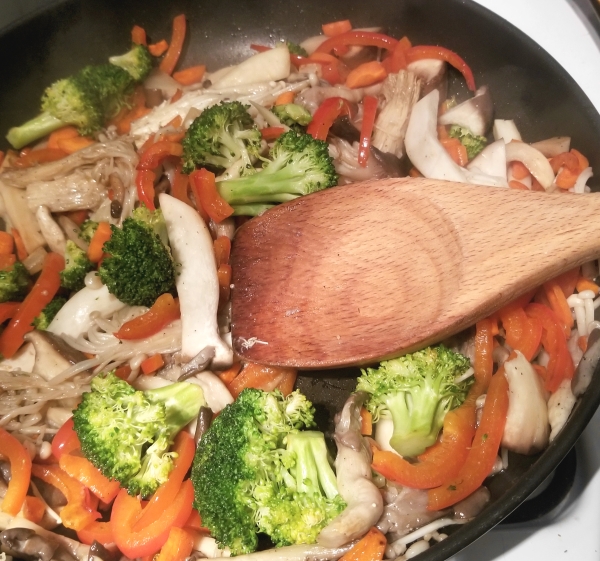 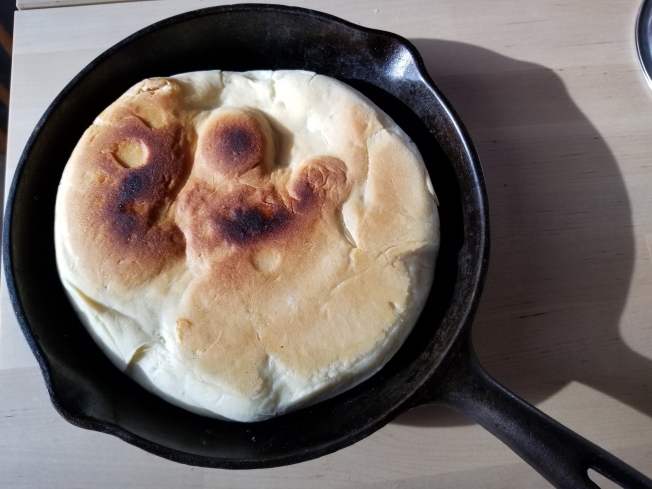 Amdo Paley: Legend has it that this is the Dalai Lama’s favourite snack. This pan cooked bread traditionally made with tsampa, or barley, flour (though Eric’s recipe called for wheat flour) is a popular Tibetan street food. 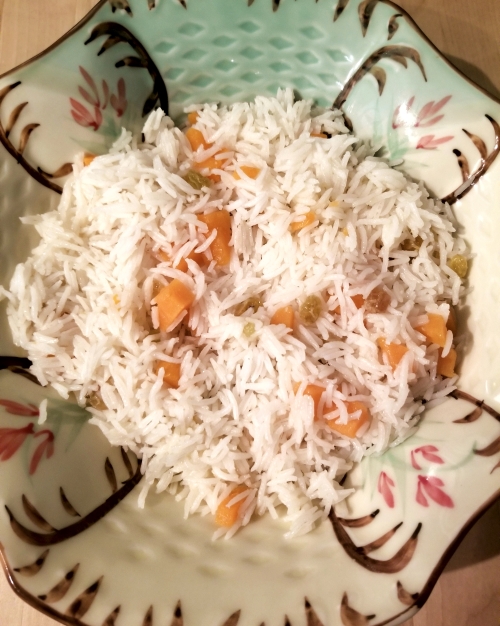 Desi: Fluffy basmati rice sweetened with sugar, and tossed with yellow raisins and chunks of soft sweet potato (sweet potato was the recommended substitute for the Tibetan root vegetable droma, which Eric couldn’t find in Toronto).

Eric found most of his ingredients at our local supermarket, but journeyed to Chinatown’s Hua Sheng Supermarket for Szechuan peppercorns, Chinese red chilli peppers, and mung bean starch. Eric went to Alex Farm at St Lawrence Market for his cheese, and chose a chunk of English Shropshire Blue, which matched the rich yellow colour of the Tibetan churu that he had seen online (as opposed to the whiter French blues we are more familiar with). 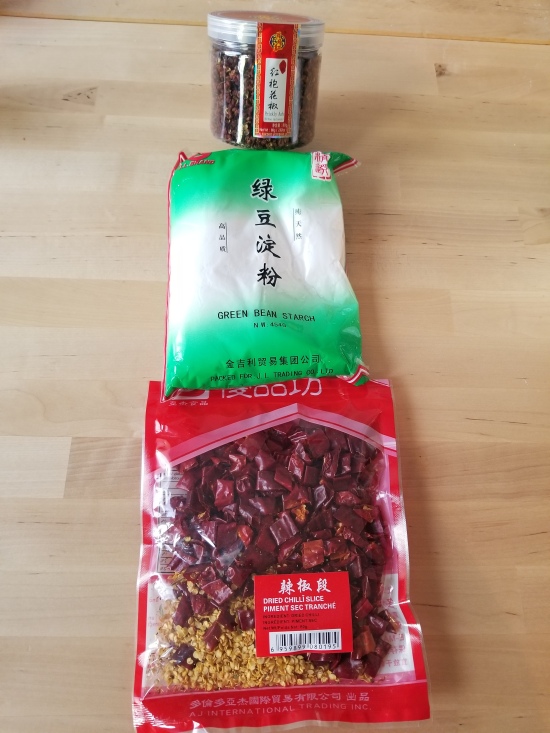 The kitchen is usually a restricted area while the cook is at work on an assignment, but for a few of his dishes, Eric found that four hands were better than two.

The first attempt at the le-ping gelatin resulted in a blobby mass rather than the pourable paste described by the cookbook, so Eric called me into the kitchen to stir vigorously while he slowly poured the mung bean starch in with the water. It came to a smooth clear gel that Eric transferred into a mould and allowed to set for several hours. Because it looked so strange, it was also the first dish we wanted to try. I’m not a jell-o person (I don’t think foods should be able to do a dance), but this savoury version was altogether different. It tasted strongly of chive and garlic, and was even better dunked into soy sauce loaded with yet more chives. 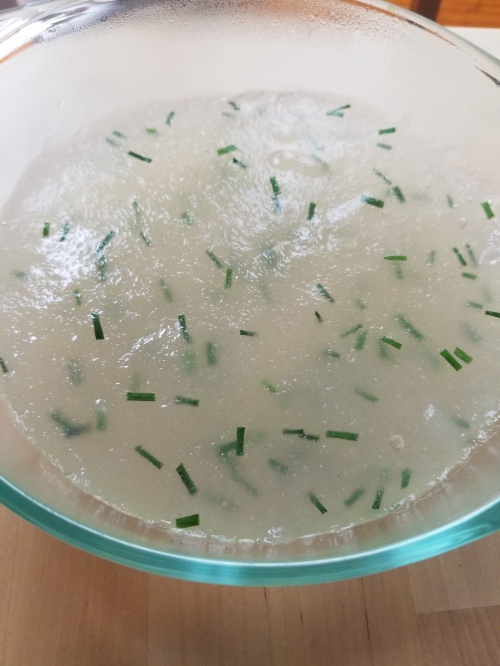 The second time I breeched the don’t-you-dare-step-into-this-kitchen rule was for momo folding. The cookbook suggested that folding momos could be tricky, and Eric worried that if he had to handle the dough too much to get the folds right, it might be unusable. He tried to press and roll the dough flat, but I had an idea to use the pasta machine to get super thin dough. It worked like a charm, and the dough ended up being more forgiving than expected, though it needn’t have been — we took to momo folding like two professional momo folders at a momo folding conference. 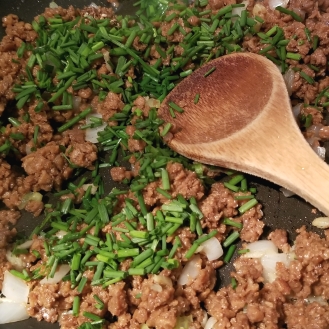 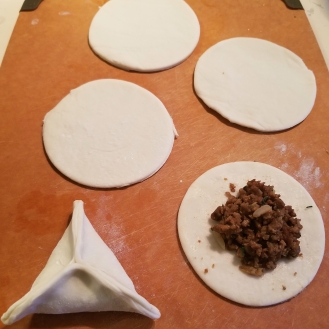 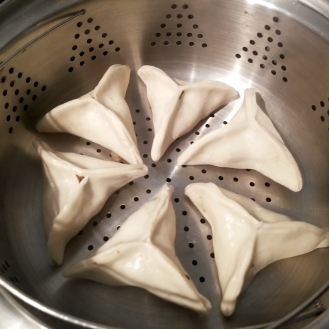 The folded momos were then steamed, and worried that they wouldn’t warm through if he didn’t steam them long enough, Eric may have given them a few moments too many in the steaming basket, so they weren’t super soft. They had a great flavour, though, and we dipped them into the soupy, spicy sibeh — we needed hardly any to set our mouths on fire. Luckily, those tongue-numbing Szechuan peppercorns were folded right into the momos.

Finally, Eric wanted some input on his stovetop bread, amdo paley. He had only ever done oven-baked breads, and he felt a little at sea. Ultimately, preparing the dough was much the same as for an oven-baked bread, and the stovetop cooking was easy to do in our cast iron pan. The bread turned out crusty on the outside, and soft and fluffy on the inside. It was very filling, and the Dalai Lama is definitely onto something with this snack. 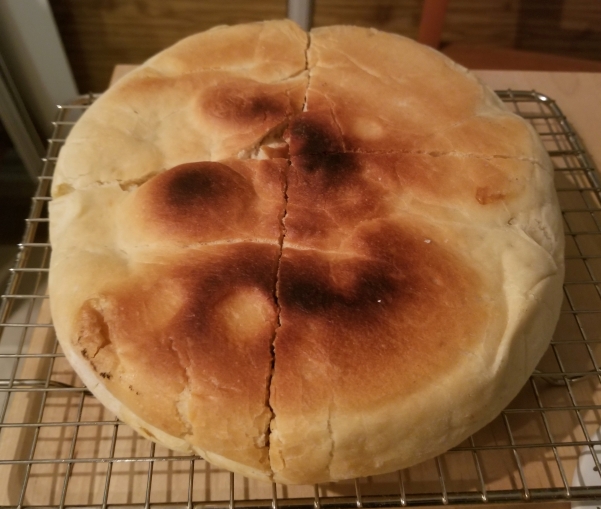 The mushroom stir-fry was probably the single most mushroom-y thing I’ve ever eaten. Enoki, king, and black oyster mushrooms were tossed with fresh vegetables for a hearty, flavourful, and colourful dish that gave us a little break from the spice.

A simple, cheesy soup accompanied the meal, lending more zesty churu flavour to the experience. Maybe it violates some amdo paley rules, but I enjoyed dipping my bread in the soup.

We rounded off our meal with sweet desi rice. Buttery, with warm juicy raisins and pillowy chunks of sweet potato, this dish was hard to stop eating, even though our bellies were already so full. In Tibet, this is not strictly a dessert, rather a breakfast food, and is served piled high to signify prosperity.

There is a sizeable Tibetan population in west Toronto, and we plan on heading to Little Tibet to compare the WSW experience to the real thing.