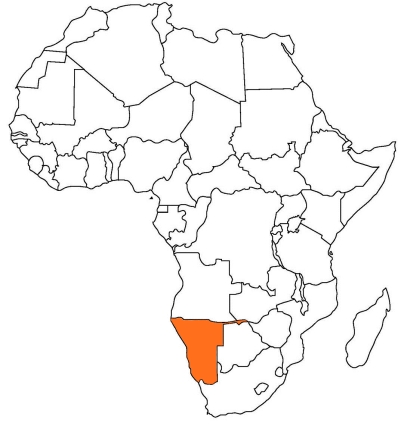 Namibians eat a lot of meat. I mean A LOT. If you’re a tasty animal, it’s a bad place to live. Namibian cuisine revolves around the braai, or barbecue, as well as the potjie, or Dutch oven. Since Eric and I keep our menu pescatarian for my sake, this was a tricky assignment. It wasn’t until I stumbled across the Curious Kitchen blog that things really got going. The Curious Kitchen is run by a Windhoek resident with a passion for local cuisine and an interest in exploring the Namibian-ness of Namibian food. Her recipes, and information I gleaned from reading her posts, were indispensable as I built my menu. Namibian cuisine has been influenced by the Germans, British, Dutch, and South Africans, and it shows in the variety of flavours available.

Mieliepap Wraps: Thin corn wraps baked on the stovetop, then stuffed with coleslaw and (veggie) beef.

Herero Bread: Wheat-based bread with nuts and raisins baked in. I baked mini loaves in tin cans to mimic the look of the ones on the Curious Kitchen. 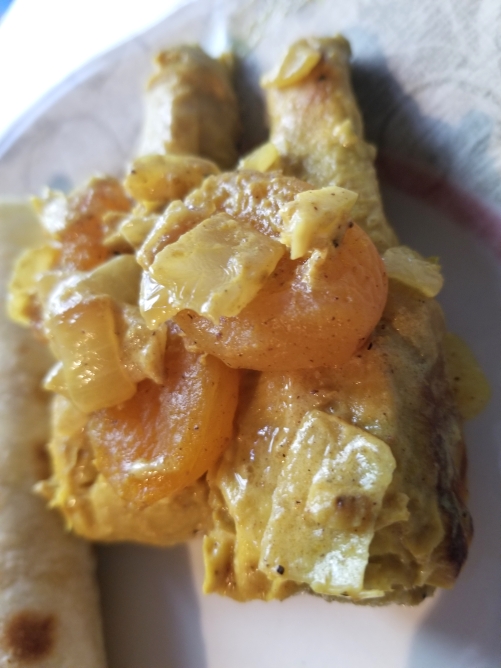 Pineapple Beer: Just what it sounds like — a sweet beer made from fermented pineapple pulp.

I knew I was going to be needing some high-quality meat substitutes, so I headed for King’s Cafe in Kensington Market. There, I found unseasoned chicken legs and barbecue beef, all made of seitan.

I needed marula nuts for the herero bread, but they are very hard to find here in Toronto. My research suggested that their flavour is not too far from macadamia nuts, so I picked up a bag of those at Bulk Barn.

I started the pineapple beer six nights ago, chopping a pineapple, peel and all, into chunks, and then blending it in a food processor. After six days, a slop of water, sugar, and pineapple puree had fermented and turned into a weak beer, which I strained through cheesecloth. The flavour was decidedly pineapple-y, but with a cider-like profile.

The herero bread rose twice before baking, and then I tore it into quarters and stuffed each dough ball into a tin can. After 25 minutes, each loaf had risen over the can and browned. Two came out of their cans easily, and the other two had to be patiently coaxed out using a butter knife and gravity. The bread was dense and rich, studded with soft raisins and macadamia nuts. It was delicious slathered in butter, still hot from the oven.

The curried chicken was easy to throw together, and sat cooking on the stovetop while I made everything else. The drumsticks were excellent, with quite a genuine chicken consistency (they even had a wooden stick inside like a bone). They soaked up the curry flavours, and went well with fat dried apricots, also coated in yoghurt, spices, and onion.

The mieliepap wraps came together in no time at all with a little coleslaw — carrot, cabbage, and green onion, with a dressing of mayonnaise, lemon juice, mustard, and maple syrup (may own tried-and-true recipe) — and seitan beef on the homemade corn wraps. The wraps themselves were soft with a very mild corn flavour, and the seitan was sweet and meaty. The coleslaw added a fresh crunch that brought the dish together.

Our Namibian feast was excellent, and left us wondering why there are no Namibian barbecue restaurants here in Toronto. This city is ready for the fantastic flavours of the braai.