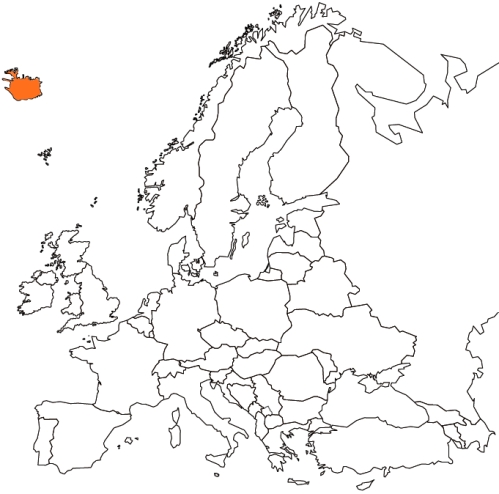 We receive our cooking assignments through a randomized process that narrows down our options first by region, then by country or territory. This assignment, however, is an exception — we chose to do Iceland now, for a very specific reason. That reason is söl.

Eric and I spent just over a week in eastern Canada this summer (you may have noticed a gap in Wooden Spoon Wanderer posts…this gap may have had you crying yourself to sleep, and for that I apologize), touring the beautiful provinces of Nova Scotia, Prince Edward Island, and New Brunswick. It was while stopped for gas in New Brunswick that Eric came running out, a plastic packet in his hand.

“It’s a New Brunswick tradition!” he declared, handing me a bag of what looked like crispy, purple lettuce with tiny seashells mixed in.

Dulse is seaweed harvested in Eastern Canada, Ireland, and Iceland, where it is known as “söl.” It’s gaining ground as a health product, since apparently when fried, it tastes like bacon. (It’s just not gaining ground as quickly as bacon, which when fried, tastes exactly like bacon.) Since we had this rare ingredient in hand, we decided upon returning home to take advantage of it. So we declared today Iceland day. 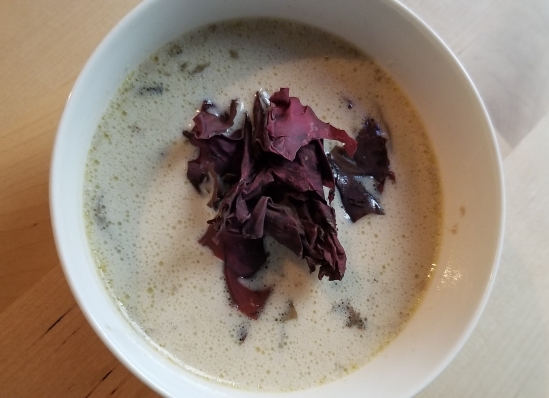 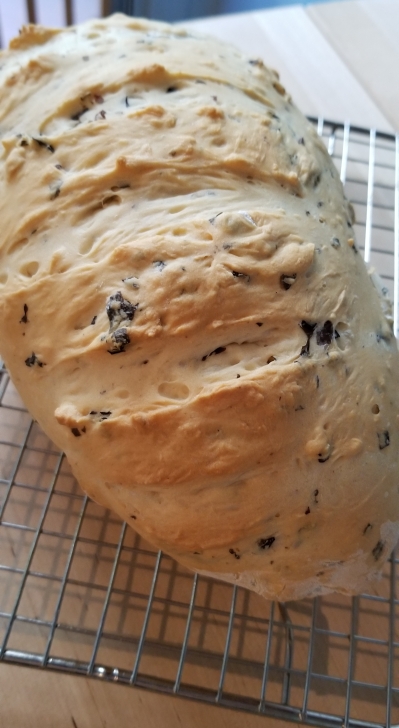 Sölvabrauð (Dulse Bread): A fluffy wheat bread with flakes of söl baked into it.

Plokkfiskur (Fish Mash): Eric and I travelled to Iceland last winter, where at a lovely restaurant called Salka Valka, we enjoyed the creamy potato-and-whitefish stew known as plokkfiskur. It was our favourite meal in the whole country, and I had to try my hand at it for this assignment.

Pönnukökur: Icelandic crepes, in my case served with skyr (thinned out with a bit of cream), blueberries, and rhubarb compote. I looked into making skyr, but it seems that to make it, you need at least one tablespoon of skyr. So I just bought skyr. Iceland bursts with blueberries in the early summer (just like Ontario), and they are often eaten alongside creamy skyr.

Dulse wins the award for coolest ingredient story so far, I think. The rhubarb stalks for the compote were picked right out of our garden half an hour before I started cooking. Everything else I needed was from our regular supermarket.

I gave myself a demanding menu, to say the least, so figuring out my timing beforehand was key. Unfortunately, I just kind of winged it (when will I learn?), so things were pretty hectic. Still, it’s some of the most fun I’ve had cooking for an assignment, and that’s saying something.

I started with the dulse bread, a recipe from Icelandic Food & Cookery. The recipe actually calls for Icelandic moss as well, and while Toronto has provided us with some fantastic ingredients from around the world, there was no moss to be found. I hoped that by adding a bit more flour and dulse, I could do without the moss. The bread gave me a little trouble at first, rising like crazy, overflowing its bowl, sticking to everything (bowl, spoon, me), but once it was baking, I could tell it was turning out well, browning and crisping up exactly as I had hoped. It was the first thing Eric and I tried once we had sat down at our Icelandic table. It was very fluffy with a nice crust, quite like a French bread. The dulse was very subtle in bread form.

This cannot be said for the dulse soup, which tasted like Cream of Mushroom and Ocean. No complaints, though — it was really good. Neither Eric nor I had ever tasted anything comparable to it. It was creamy, mushroom-y, and seaweed-y. We both dipped chunks of bread into it and wiped the bowls clean.

I can’t be sure that my plokkfiskur was a true likeness of the one we ate in Reykjavik, because the main things I remember about the dish we ate last winter are: 1) Creamy; 2) Yummy. Mine was really good, though. I pre-boiled the fish, and so it broke into flakes and coated the potatoes. Every bite was both fish and potato (and the underlying creaminess of the milk and butter).

Probably my favourite thing on the table was the glazed cabbage, a surprise standout. Just cabbage, butter, sugar, salt, and water, this simple dish was caramel-y sweet, buttery, juicy — just lovely — and I only just picked it out last-minute from the Icelandic cookbook!

We finished our meal with Icelandic crepes, or pönnukökur. Crepes have a reputation for being fiddly since they are so delicate, and these are the same. It took me three to get the hang of coating the pan with a small scoop of batter, turning the pan this way and that to get an even crepe, lifting the edges continuously with a spatula to ensure the crepe didn’t stick, flipping it one-handed to cook the other side, then sliding the cooked crepe onto the stack. I felt quite smug by the time I was finished. The crepes were golden brown, eggy, with a bit of sweetness. We filled them with skyr, rhubarb compote, and blueberries, then rolled them up. I wish I had have made a dozen instead of just a few.